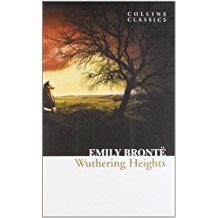 Almost everyone knows the name, ‘Heathcliff’, though not many have plowed through the dense undergrowth that both surrounds Wuthering Heights and fills its pages.  This is a tale of love conquering all, but it kills just about everyone before it triumphs.  Told largely through the eyes of Ellen Dean, the servant girl brought up by the Eashaws along with their own children, Hindley and Catherine, along with the Liverpool street urchin, Heathcliff (we never do learn his surname!), brought home at the age of 8 or 9 by Mr. Earnshaw as a good deed.  Nell tells her tale to Mr. Lockwood who has come to stay for a year at Thrushcross Grange and becomes entangled in the internecine warfare on the moors.  The Earnshaws and Lintons intermarry and eventually nearly all die off leaving the properties to Heathcliff who then promptly dies pining away for Catherine nee Earnshaw Linton.  Her daughter Catherine and Hindley’s son Hareton are the ones who finally live happily ever after.  Life is harsh on the moors and Heathcliff (along with Joseph and Zillah) is as harsh as the conditions.  A tale of love, greed, and the influence of parents on their children.

True Stories and Other Essays, Francis Spufford (#2239)
Scroll to top