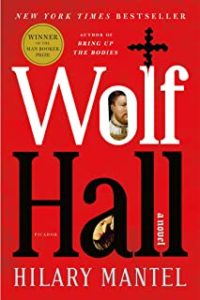 Wolf Hall is all that fiction can be—powerful, unforgettable characters in numbers so great that the author provided a ‘cast of characters’ at the front of the book; a vivid set of locations in 16th C. England; a plot which keeps the action moving along at a steady and rapid pace; and a central character who with his complexity, brilliance, and Realpolitick has a firm hold on the reader’s sympathy and support.  There were many reasons why I skipped this novel when it was published 11 years ago.  It was historical fiction, a genre which I often find pretentious and off putting. It was too long, at 600 pages.  It was filled with so many characters that I wouldn’t be able to keep a Tudor straight from a Lancaster or York. Finally, it was published at a time when Henry VIII and Thomas Cromwell were everywhere—on TV, on the stage, in books and movies.  I finally turned to Wolf Hall while ‘reading from my shelves’ during the pandemic and I’m so grateful that I did. What a terrific book!  Its length was hardly a drawback since I was disappointed that it was ending as it drew to a close; and as far as Cromwell and his supporting cast, kudos to Mantel for creating such a vivid group on the page.  It took me some time to realize that whenever ‘he’ was speaking or thinking, it was Cromwell, and it did take me quite a while to figure out who was who, but it was all worth it.  I won’t reprise the plot which centers around Henry’s efforts to get rid of Queen Katherine and marry Anne Boleyn so as to have a male heir for the House of Tudor.  Suffice it to say that you will be quickly and totally immersed in 16th C. England and the whole business of how Cromwell rises from a blacksmith’s son to become the most powerful man next to the King.  Don’t miss this one.