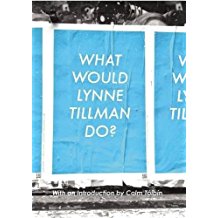 Identified by Fran Lebowitz in the By the Book column on 3/26/17 as one of her most admired current writers, Tillman is a prolific essayist, art critic, novelist and short story writer who had previously escaped my notice.  I have remedied that, and what an introduction.  A collection of works from contemporary periodicals, primarily Artforum, Frieze, and the Voice Literary Supplement, Tillman takes on a multitude of topics in 28 essays loosely organized around the alphabet:  A is for Andy Warhol, K is for Kafka, M is for Marx, etc.  Writing with clarity and incisive views, she holds forth on art, feminism, literature (an especially wonderful chapter on Edith Wharton’s House of Mirth), Jane Bowles (who turned up last week in the NYT Book Review), Chet Baker, Paula Fox (already rediscovered by Jonathan Franzen), Nan Goldin, Harry Matthews (the only American in the Oulipo Group and an introduction to Raymond Queneau and his Hundred Thousand Billion Poems), John Waters’ memoir Role Models, Diane Arbus, Don DeLillo’s Underworld, Gertrude Stein, George Saunders, Peter Dreher (who has painted a glass of water every day for 22 years+, more than 5000 and counting), and more.  You get the idea—-smart, great writing, incisive views, connecting me to dozens of new exciting individuals and works.  All my favorite elements of the essayist!