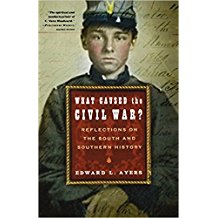 What Caused the Civil War: Reflections on the South and Southern History, Edward L. Ayers, 2005

The beginning of my reading in preparation for next year’s Winthrop House reunion in Richmond, VA, this collection of essays by the former president of Richmond University, is fascinating and absorbing.  Ayers begins with reflections on his origins in Tennessee where his parents worked at a printing factory to his education at UT and Yale, and his scholarship and teaching at UVA as he ‘accidentally’ became a Southern historian.  Essays on the Civil War and Reconstruction follow as he develops his theory of deep contingency rejecting the simple approaches of fundamentalists (it’s all about slavery) and revisionists (it’s all about the underlying political and cultural differences) to develop a unified theory of complex and unpredictable events occurring against a backdrop of cultural, political, and economic change.  His style is conversational and his arguments are powerful.  This is a fine place to begin my education or re-education about the Civil War, the events leading up to it, and the Reconstruction that followed it.  Here’s a good sample and summary of his thesis:  What caused the Civil War?  If you have to offer a one-word answer, go ahead and just say slavery.  But you should know what you mean by that answer.  The Civil War did not come from the sheer intolerable existence of slavery in a nation built on the ideals of freedom, or from the past and the future caught in a death struggle, or from a familiar sequence of political events that crashed into one another in a chain reaction like so many billiard balls.  Rather, you mean slavery as the key catalytic agent in a volatile new mix of democratic politics and accelerated communication, a process chemical in its complexity and subtlety.  You mean, in short, history, the living connection among fundamental structures, unfolding processes, and unpredictable events.  Eager to read more of Ayers and more about the Civil War.