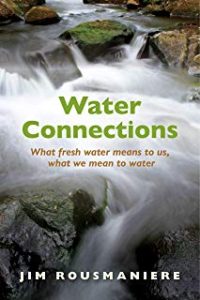 Water Connections: What Water Means to Us, What We Mean to Water, Jim Rousmaniere

Rousmaniere, a classmate of mine in college, has written a fine book about a myriad of issues relating to fresh water in New England.  A long time editor of the Keene Sentinel and a historian by education, he excels at finding the fascinating person, the historical twist, the telling incident, in short, the story;  he applies those stories to educate us about our most precious and threatened element, fresh water.  This is not an encyclopedic examination of how more than a billion people around the world do not have access to potable water, nor is it a scientific study of our water resources.   In fact, there are few statistics, no graphs, and zero scientific jargon.  What there are plenty of are stories about people who have made a difference that has resulted in the recovery of clean rivers and streams in New England. Beginning in his own back yard, Rousmaniere follows Roaring Brook, a small stream that arises in Roxbury, NH (population 211) and provides Keene (a city of 23,000) with its drinking water.  From there we learn about dams and mills, ponds and reservoirs, pollution and sewage, and fish.  Thetwo central themes in each of these stories is 1) how water has been a critical factor in the settling and development of the U.S. and 2) how individuals can make a difference—-how citizen action, whether inventing something called the water dam to provide clean water to homes and fields, or political activity to save a watershed, to re-establish access by fish to their spawning grounds, or to provide protection to drinking water sources can make a difference.  The combination of citizen action, political mobilization, and government regulation has resulted in New England having clean, clear, drinkable water for its population and supportive habitat for its fish, animals, and birds.  As someone who has been on the board of an organization devoted to the Charles River, who has been a citizen scientist taking water samples from the Charles at 5AM monthly in all weather,  who has followed the small brook in our Vermont backyard back to its source and to its termination in Mill Brook (which gets a shout out from Rousmaniere for its impact on Windsor, VT) which runs into the Connecticut River and then the Atlantic Ocean, I loved this book and its wonderful stories.  I think you will as well.