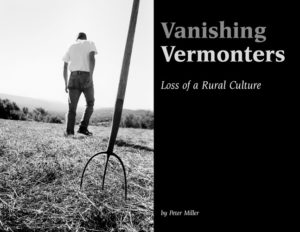 Miller, born in New York City but a Vermont resident since age 14, has published five books about his adopted state.  Comprised primarily of photographs by this award winning former Life Magazine photographer, this one has extensive interviews with 24 Vermonters.  The theme is almost universally one of loss of local control, privacy, individual freedom, and an affordable life style.  From the well-known (Howard Dean, Bill Schubart, Phil Jordan, and Fred Tuttle) to little known retired farmers, saw mill operators, and dairymen, the message is the same: the flight of wealthy, part-time living flatlanders from MA, CT, NJ, etc who have taken over the selectboards and state house in Montpelier has resulted in high taxes, over-regulation, and the inability of long time Vermonters to afford to live and manage their lives in the state where generations of their forebears had settled.  The interviews are preceded by Miller’s written description and his photograph of the interviewee and are followed by some beautiful black-and-white photographs of the local landscape and town.  It’s another one of Miller’s beautiful contributions to the state, but the message of resistance to change is not an optimistic one.  The loss of the traditional Republican values of small government, low taxes, and individual self-reliance are mourned by most but there is some optimism in the interviews with Jen and John Kimmich, founders of Alchemist Brewing Company.  One comes away with an awed respect for Vermont’s original settlers and the generations that followed—self-reliant, hard-working, versatilely competent.  One also comes away with the feeling that their world is disappearing and gone forever.