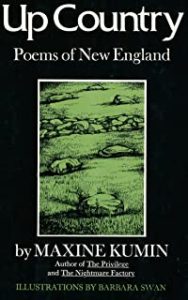 Kumin won the Pulitzer Prize for Poetry in 1973 for this work which I thoroughly enjoyed.  Sitting on the Adirondack chair facing Mt. Ascutney just after dawn with the sky filled with birdsong and the gardens ripening behind me, was the perfect place to immerse myself in her New England poems.  Though I usually enjoy illustrations accompanying poems, the ones in this old paper back didn’t work for me, but the words certainly did.  Kumin was an interesting woman. The child of a lower middle class Jewish family living outside Philadelphia, she attended a Roman Catholic convent school before heading to Radcliffe.  In her lifetime, she published nearly 50 books of poetry, fiction, essays, and children’s books, serving as the US and then New Hampshire poet laureates in the 1990’s.  Her work is approachable and deeply enjoyable though there is a strong vein of memento mori in it, perhaps heavily influenced by the suicide of her dear Cambridge friend Anne Sexton in 1974.  My favorite poem in this volume draws on the language on tombstones in an old New England graveyard interspersed with language about current residents of the town.  It’s entitled July 5th.  Another poem entitled Death, Etc ends with the lines: “We try to live gracefully/and at peace with our imagined deaths but in truth we go forward/stumbling, afraid of the dark,/of the cold, and of the great overwhelming/loneliness of being last.”