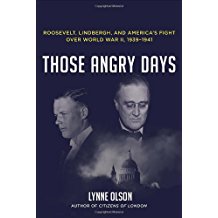 A superb book about the fight which consumed the US in the two years before Pearl Harbor.  The isolationists led by a reluctant Lindbergh, Amerca First’s business leaders and German sympathizers, Senators Wheeler, Nye, and Johnson vs. the interventionists led by William White’s Committee to Defend America, the Century Club’s Grenville Clark, Secretary of War Henry Stimson, and the British fought extremely (FB wiretaps, Anti-semitic violence) and long over this question.  FDR comes across as a tired and ambivalent and ineffective leader afraid of public opinion and hesitant to commit.  The parallels to our own time of government paralysis and ineffectiveness amid public brawling are striking.  The slow and ineffective industrial mobilization, draft, and army training, and legislative attempts to help first the UK and then the USSR were finally overtaken by Pearl Harbor which propelled the US into its role as the arsenal of democracy and the sole surviving world power.  The Anglophobic feeling about imperialist Britain was a new insight.  A bit too detailed but superbly told story!