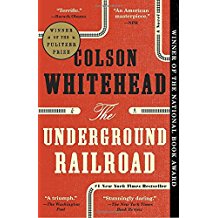 The National Book Award winner for fiction last year, Whitehead writes a powerful tale of the toll that slavery took on Africans kidnapped, shipped across the Atlantic in horrendous conditions, sold into bondage, beaten, murdered, raped, and degraded until early deaths took them.  Like the movie, Twelve Years a Slave, this book will raise the consciousness of White Americans who while aware of slavery, have been fed a steady diet of the ‘happy darky’ and the beneficence of plantation life in the pre-Civil War south  (think Gone with the Wind).  With great skill, Whiteheaad weaves the stories of two individuals, Cora a slave in Georgia who escapes to South Carolina on the underground railroad and finally finds a way West to freedom) and Ridgeway, a slave chaser who pursues her all the way to Indiana before she finally murders him in a thrilling scene.  The characters are powerful and memorable, the action is often breath-taking, the descriptions are vivid, but what might be its most unusual feature is the mixing of the true and the fictional.  I don’t think there was an actual underground railroad with locomotives and engineers, but I could be wrong.  At any rate, Whitehead has written an unusually fine novel, both enthralling and educational.

Maigret and the Bum, Georges Simenon (#2106)
Scroll to top