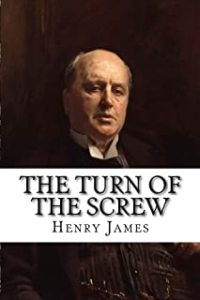 In this classic ghost story, James uses a story within a story to introduce us to Bly, a country estate outside London where a new governess arrives to care for Flora and Miles, the newly orphaned niece and nephew of a Harley Street wealthy man whose brother and his wife had died in India.  The governess (whose name I don’t believe we ever learn) finds  two lovely children but is soon discomfited by a letter from Miles’ boarding school which indicates he may not return.  What could possibly cause a school to expel such an angelic child?  Soon, the governess is much more concerned by the apparent arrival of two former employees at Bly who she eventually learns are dead—Quint, the valet, and Miss Jessup the former governess.   They appear randomly and perhaps only to her, but seem totally real and bent on communicating with the children.

As the story unwinds, I was first convinced that the governess was mad and imagining things, but as the story plummets to its final pages, we learn that both Flora and Miles were subject to saying outrageous and heretical things, perhaps indicating their possession by Quint/Jessup.  Suspense builds until the final line which I won’t share to avoid spoiling your reading.  The debate about James’ intent has been vigorous over the years among literary critics.  Is the governess mad and the story represent the descent into psychosis as suggested by Edmund Wilson or are the ghosts real and working to Satanically possess the children, a view embraced by Truman Capote?

Though some of his sentences are nearly infinitely long and tangled, James story is wonderfully wrought and a great read for a stormy winter night when the wind blows through the eaves and the shadows dance on the walls.  Boo!