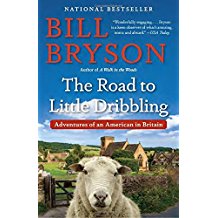 Bryson continues to be among my favorite authors—laugh-out-loud funny, provider of fascinating historical details about offbeat persons and places, and a clever writer who keeps the story moving along at a fine pace.  This book evidenced all of these characteristics, but was uneven.  Started great and finished strong, but dragged in the middle as Bryson travelled from the southeastern tip of England (King George V:  Bugger Bognor) to the northeastern tip of Scotland (Cape Wrath).  In between he visited famous (Oxford, Cambridge, Manchester, Liverpool) and obscure places providing fascinating portraits of the once famous and now forgotten—lighthouse designers swept away in storms, railroad builders killed by locomotives, and my favorite, 32 year old Captain Lawrence Oates who stepped outside his tent in Antarctica during the doomed Robert Falcon Scott expedition in 1910 saying “I am just going outside and may be some time.”    He seems to have gotten a bit grumpy in his older years and found much to grouse about with the English, but his love affair with the island nation’s peoples and land remains intact for several reasons:  Britain gave him ‘a million good things that I wouldn’t otherwise have had.”, Britain is fundamentally sane, has a fine quality of life (appreciation of small things, restraint with respect to greed), and continues to have a beautiful countryside.  Made me want to return to Great Britain (despite their idiotic Brexit vote this week!!!!) and visit many of the seaside towns as well as Durham where Bryson was Chancellor of the University for six years.