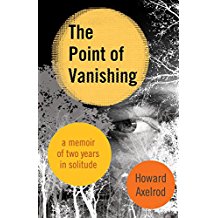 The Point of Vanishing, Howard Axelrod, 2015

The second time I’ve read Howard’s book (spoiler alert: He’s the son of good friends and I’ve known him for many years.), and a slower, more attentive reading was rewarded by a greater appreciation of the fine language and writing. The story is familiar: a young, Harvard junior plays a pick-up basketball game during studying for finals and is blinded in one eye in a freak accident. After spending several years traveling to Italy on a Rockefeller where his heart is broken by a Viennese student and travelling around the Western US, he rents a cabin in an isolated corner of Vermont where he spends nearly two years finding himself in the solitude of nature. Thoreauesque but very different. Plan to write a review for the Bennington Banner.