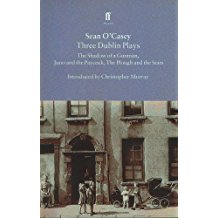 This play first performed at Yeats’ Abby Theater, is set in Dublin during the Easter Rebellion of 1916 and tells the tragic story of the poor tenement dwellers who rose up against the British while also fighting alongside the British in WWI.  There is much loss and death (Bessie Burgess, Jack Clitheroe, Mollser and Nora’s baby,) and Nora’s madness finishes this sad, tragic, and very down play.  Heading to the ART to see it performed live 90 years after it was written.

On Trails: An Exploration, Robert Moor (#2055)
Scroll to top