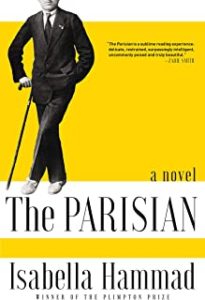 This debut novel is impressive in its sweeping scope of time, place, and person.  Hammad creates a memorable character in the eponymous Midhat Kamal who we first meet as he leaves Nablus, a Palestinian village in the pre-WWI Ottoman Empire and travels by donkey, train, and boat to Montpellier, France where he is enrolled in medical school.  He lives with a French anthropology professor, Doctor Molineau and his daughter, Jeanette. Like the old adage about the gun over the doorway that appears in Act I that inevitably will be fired by the end of the play, Jeanette and Midhat inevitably fall in love only to be separated by their ethnic and religious differences and WWI.  Midhat goes to Paris and then returns home to find a family and a Palestine that is riven by the collapse of the Ottoman Empire after the War.  The book follows Midhat as he struggles with family, British colonialist rule, Zionist activism and Jewish immigration, and ultimately his deep and abiding love for Jeanette.  I’ll avoid a spoiler alert and leave it to you to discover how the tale ends, but it’s a tale worth reading.  A bit longer than it needs to be with Arab names that are almost as confusing as the Russian names in Tolstoy et al, the book ultimately succeeds in its broad historical sweep and illumination of the impact of the world on individuals.

Stars in Our Pockets: Getting Lost and Sometimes Found in the Digital Age, Howard...