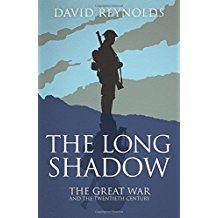 The Long Shadow:  The Legacies of the Great War in the 20th Century, David Reynolds, 2014

The author, a professor of international history at Cambridge, casts a wide net examining the territory of the aftermath of the Great War, much as Sleepwalkers examined the run up to it.  Reynolds is ambitious and overall quite successful in juggling multiple time frames (intra-war (1914-1918), immediate post war (1918-1922 Treaty of Versailles), the Depression and economic disasters of the 30’s, and the lead up to WWII, multiple countries (the four fallen empires of the Habsburgs, Hohenzollerns, Ottomans, and Romanovs) as well as the Allies with a special emphasis on Britain’s dealings with Ireland, India, and the Middle East.  His two major organizing principles are Legacies (nations, democracy, empire, capitalism, civilization, and peace) and Refracions (again, evil, generations, Tommies, remembrance).   England emerges quite impressively but Wilson and his democracy and self determination for all don’t do as well.  Detailed, well written, and readable, this is an excellent introduction to the inter-war period and how the seeds of 20th and 21st C disasters were sown .