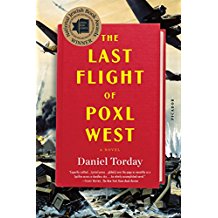 This is the debut novel for the son of a good friend from the Joint Program in Neonatology period of my life.  Torday’s book has gleaned rave reviews (front page of the New York Times Sunday Book Review!), abundant blurbs from big names (George Saunders, Gary Shteyngart, Mary Gaitskill), and a bushel of prizes including Amazon.com’ Best New Books of 2015 award. The novel is a quite creative, complex, and intricately constructed story of a young boy’s maturing into adulthood through the writing and later downfall of his “uncle” Poxl’s novel.  We learn details of the Holocaust’s impact on individuals, the RAF’s air war on Germany, the courage of the Brits during the Blitz, and the fragility of the human being.  The ending left me unhappy with several loose ends and there was an occasional overdone metaphor, but nevertheless, Torday knows how to tell a story, especially in his descriptions of battles and bombings.  This is a wonderful effort which promises a long and successful writing career.

Maigret and the Headless Corpse, Georges Simenon (#1954)
Scroll to top