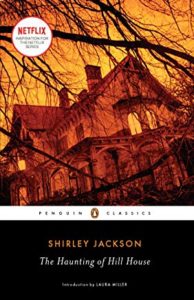 Jackson is widely acknowledged today as one of the great writers of Gothic fiction, a genre described on BookRiot as ‘merging deep passions with chill dread. A Gothic story might include grand and decaying architecture, like medieval castles, English manors, or Southern mansions; grim weather, like freezing rain or oppressive heat; ghosts; darkness, with or without candles; mental illness; dungeons, basements, secret passageways, and labyrinths; eroticism; sick or sickly women; passionate and sometimes villainous men; blood; gloomy forests; and of course, the aforementioned sublime emotions and eerie atmosphere.”   The Haunting of Hill House has all of that and more and is now viewed as a classic, even meriting a NetFlix series last year.  The story is weird from the get go. Two women accept invitations from a complete stranger, Dr. Montague, to come to Hill House, an abandoned mansion set off in the country, miles from the nearest small town—“Hill House, not sane, stood by itself against its hills, holding darkness within; it had stood so for eighty years and might stand for eighty more.”  Eleanor Vance and Theodora (one name, like Prince) join Luke, the nephew of the current owner, and  Dr. Montague to spend a week at Hill House and document their experiences with the mysterious forces that are rumored to occupy it.  The doctor is seeking legitimacy by publishing his ‘definitive work on the causes and effects of psychic disturbances in a house commonly known as ‘haunted’.”  And this cast of weird characters are not disappointed as Hill House does its thing with ice cold drafts at doorways, strange shrieking and shaking of doors at night, and hallucinatory visions of both beauty and horror.  The whole plan ends very badly for at least one of the group, but to reveal more would require a spoiler alert here!  I’ve not read widely in Gothic fiction since these stories seem to  always be walking the tightrope between mental illness and the world of the paranormal, whatever that is.  But if Edgar Allan Poe, H.P. Lovecraft, and Bram Stoker are your cup of tea, Jackson’s book would be good company for a cold and stormy night in a strange New England inn.  That is, if you like to be frightened!