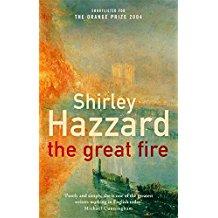 In this National Book Award winner, Hazzard tells a great love story of Aldred Leith, a Brit in Kuro, Japan to observe the aftermath of the Hiroshima bombing and Helen Driscoll, the 17 year old daughter of the Australian brigadier in charge of the camp.  The title could refer to the atomic bombing, the Great Fire of Pepys mentioned in one sentence, the Blitz of London, or perhaps most romantically, the passionate love between Leith and Driscoll.  The language, especially the description of quotidian scenes and the dialogue is spectacular and worth slowly reviewing which I did on many occasions after zipping through a paragraph an initial time.  Hazzard, introduced to me via Ali Smith’s essay in Treasured Places and then her own memoir of Graham Greene on Capri, is a truly fascinating individual.  Born in Australia in 1931, she was a British spy in Hong Kong by the age of 16 and a U.N. clerk in NYC by her early 20’s.  Her small output of short stories, novels, and memoirs is distinguished by comparison to Henry James, Henry Green, and Elizabeth Bowen.  A fine writer who merits further reading.