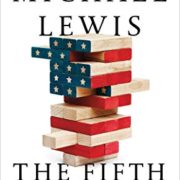 Like many of you, I have sworn off reading more about the inept, corrupt, and disgraceful person that is our president for the time being.  No Woodward, Woolf, Omarosa, Comey, or Christie, but I am glad that I made an exception for Michael Lewis’s book because, like everything else he’s done (The Blind Side, Money Ball, Liar’s Poker, etc.) it’s brilliantly written and based on extensive, informed, and insightful interviews.  Unlike the usual and by now boring attacks on “he who will not be named”, Lewis focuses on the impact of a kleptocratic leader on the critical functions of the U.S. Government.  The ‘leader of the free world’ doesn’t even appear as we meet those to whom he has given the responsibilities of carrying out the Government’s work; and important work it is as Lewis takes us from the Department of Energy (nuclear waste management) to the Department of Agriculture (WIC, food stamps, rural loan programs) and finally to the Department of Commerce (NOAA, data managment).  In each case, Lewis presents material new to me about how critical these Departments are for the safety and well-being of our citizens and how little is known about their functions even to the well-informed and educated members of our society.  He then tells how the incoming administration totally ignored the opportunities to learn about these Department functions which were eventually placed in the charge of ignorant, venal, and conflicted individuals totally unprepared and uninterested in their civic responsibilities.  The Fifth Risk title refers to the answer that Lewis got when he interviewed John McWilliams, a brilliantly successful lawyer, Goldman Sachs financial guy, and private investment success who Obama’s Secretary of Energy had coaxed out of retirement to become the Chief Risk Officer at DOE.  Lewis asked McWilliams what he considered the biggest five risks we face now that “T” is president.  The answer was 1)a nuclear weapon accident 2)North Korea (aren’t we lucky that T is on his way to meet with Kim at this very moment!!!) 3) Iran  4)the disruption of the electrical grid  5) project management.  Huh?  McWilliams chose project management because it is at the heart of what government does, from safeguarding our food supply to fighting influenza and Zika epidemics, from cleaning up the largest nuclear waste site in the world to predicting and warning us about tornadoes and hurricanes—-the basic blocking and tackling work of our Government, now in the hands of incompetent and conflicted people.  Ugh! This is a scary but important book to read. Pray for 2020!