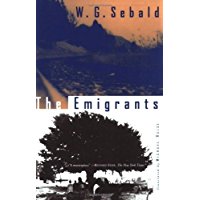 Sebald, a German who emigrated to England because of his despair over the Holocaust and who died at 50 in an auto accident in 2001, has written a poetic, beautiful, disturbing novel about four emigrants whose experience with the Holocaust haunted their entire lives.  Henry Selwyn who left Lithuania in 1899 as a seven year old commits suicide in his 80’s; Paul Bereyter loses his teaching job in 1939 because he is Jewish but joins the German army and kills himself decades later by lying on the railroad tracks because he had betrayed his Jewish girl friend; Ambrose Adelworth dies in an asylum, gay, Jewish, and alone.  Max Ferber finds his mother’s memoirs and their tale of the fall of German-Jewish patriotic citizens.  Nabokovian in his use of language, Sebald places Nabokov or a lepidopterist in every story.  Emigration, dislocation, loss, and identity are major themes in these beautiful stories illustrated with real photographs.