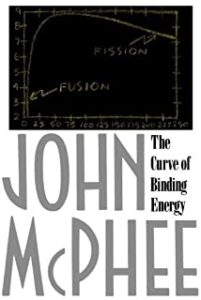 The Curve of Binding Energy by John McPhee 1973

This week was John McPhee’s 90th birthday so it seemed like the right time to read one more of his incredibly diverse, fascinating, and erudite non-fiction books.  Little did I realize that I was going to be immersed in theoretical physics, nuclear weapons, and doomsday scenarios through the life of one Theodore Taylor.

Taylor is perhaps the least known important atomic scientist of the years since the atomic bombs were dropped on Hiroshima and Nagasaki.  Born in 1926, he came to his scientific maturity in the aftermath of the Manhattan Project and played a major role in the American development of nuclear weaponry during the 1950’s, designing Davey Crockett the smallest, tactical nuclear weapon as well as the SOB, the largest fission explosion ever.  As his career advanced, however, Taylor became less interested in ‘weapons effects’ and more concerned with safeguards of nuclear fuel, primarily plutonium.  In several bone-chilling pages in the final chapter, Taylor and McPhee ascend to the 40th floor of the World Trade Tower and speculate about how a rogue bomb created in someone’s garage with stolen plutonium and information in the public domain could bring down the Towers, spread radiation through lower Manhattan, and kill half a million people.  Weirdly, the destruction of the World Trade Towers is mentioned at least four times in the book.

Taylor who died in 2004 would likely be surprised that 50 years after this book was written, the world has experienced only three nuclear power disasters (Chernobyl, Three Mile Island, and Fukushima) and zero terrorist incidents.  His criticism of the U.S. Government’s refusal to institute safeguards on nuclear material seemed to fall on deaf ears, and his predictions of the ‘end of civilization’ if we don’t manage this danger continue to hang over us.

This is not one of McPhee’s best books. The subject matter is esoteric, the personalities are relatively two dimensional (all but Freeman Dyson who called Taylor the “greatest man I ever knew well”), and the topic is either a bit dull or so frightening that one turns away.  This book is also an example of the risk of writing non-fiction, i.e. the topic will change over time and your work will either feel dated or irrelevant or both.

Lamentations of the Father: Essays by Ian Frazier (#2662)
Scroll to top