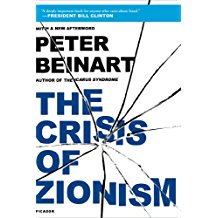 The Crisis of Zionism, Peter Beinart, 2012

Beinart addresses the issues of Israel’s occupation, settlements, and isolation in the world by urging American Jews to explore and understand the ethical and moral dimensions of Jewish power.  He attacks the organized Jewish organizations of the US by accusing them of ‘milking the Shoah’ to use a phrase I first heard from  the former rabbi of Woodstock’s Shir Shalom congregation and of creating the view of Jews as victims and today being 1938 in Germany.  Based on that fear-mongering, American Jews are powerless to criticize Israeli expansionism, the occupation, and its destructive influence on Israeli ideals as expressed in their constitution and independence documents.  Beinart urges American Jews to hold the Israeli government to a higher moral standard than other nations because that is the heart of Jewish liberal thought and tradition.  His arguments are persuasive and powerful but his solutions are not.  He urges stronger Jewish education through Jewish day schools and a selective BDS strategy that targets the West Bank, not all of Israel.  A provocative, thoughtful but ultimately unsuccessful book.

The Power of Now: A Guide to Spiritual Enlightenment, Eckhart Tolle (#1833)
Scroll to top