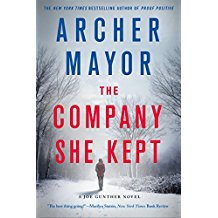 The Company She Kept, Archer Mayor, 2015

Joe Gunther, Sammie, Willie, and Lester of the VBI are involved in another Vermont murder mystery traveling from Burlington to Brattleboro to catch the murderer of a state Senator and advisor to the Governor.  Lesbians, marijuana, white supremacists, and a bizarre murder scene combine for a fairly good read.  Mayor is superb at evoking the Green Mountain State’s unique characteristics, but this particular volume felt like a bit of a stretch, especially when the murderer was plucked out of thin air in the final page or two.  I’ll keep reading Mayor but at least partly out of a sense of loyalty to Vermont rather than a love for the books.

Do No Harm: Stories of Life, Death, and Brain Surgery, Henry Marsh (#1940)
Scroll to top