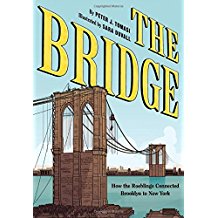 The Bridge: How the Roeblings Connected Brooklyn to New York, Peter J. Tomasi 2018

This graphic novel tells the story of the building of the Brooklyn Bridge which opened on May 24, 1883 when President Chester Arthur (one of only two presidents born in Vermont!) walked across the Bridge from Manhattan to Brooklyn Heights where he visited Washington and Emily Roebling, the Chief Engineer for this project.  The building of the Bridge took over 13 years and cost over $14million and represented one of the great engineering feats of the 19th C.  I have been carrying David McCullough’s book, The Great Bridge, back and forth from Cambridge to Vermont for as long as it took to build the bridge, but have never managed to get further than the first 50 pages or so.  Enter the graphic novel, specifically Tomasi (the writer) and Sara DuVall the illustrator and in a matter of a few hours, I’ve gotten the main elements of the story and lots of wonderful visual cues and memories.  I’m sold on the graphic novel, having loved Richard McGuire’s Here and Alison Bechdel’s Fun Home and Are you My Mother.  Not only was Tomasi’s book a great read, but the story of how a family, the Roeblings,  single-handedly conceived and completed this incredible project is quite extra-ordinary.  John Roebling, the father, had the idea but died before it could be executed.  In preparation for the bridge  project, Roebling senior had sent his son, Washington, to RPI for an engineering education, and when Roebling Sr. dies, Washington took over and managed the design and building of the Bridge.  When he suffered grievously from caisson disease, his wife, Emily, became his hands and eyes,  the real chief engineer in the final stages.  Their mutually supportive, respectful, and loving relationship is one of the highlights of this story as are the small portraits of key workers and laborers who made it happen.  Highly recommended, especially for young folks living in Brooklyn (that means you Jonah!).