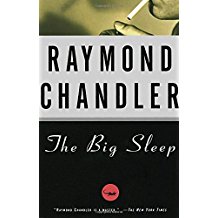 Chandler’s novel and main character, Philip Marlowe, are widely credited with being the original model for so many modern detective heroes and genres including Robert B. Parker’s Spenser.  The work is dated by its heavy presence of smoking, drinking alcohol, abusing ‘dames’, and bad-mouthing ‘faggots’, but the snappy dialogue and the hard-bitten private eye who is honest, moral, and heroic rings true today as it did 70 years ago.  In this classic noir private dick tale in LA, Marlowe is hired by an elderly, rich retired general to solve the blackmailing of his daughter and the disappearance of his other daughter’s husband.  Many, many deaths later, Marlowe accomplishes both tasks refusing the proffered love and sex from both daughters and saving his employer’s emotional health as he nears physical death.  It’s a good read, though dated, and it is easy to see how Parker, Grafton, Burke, and so many others owe Chandler a great deal.