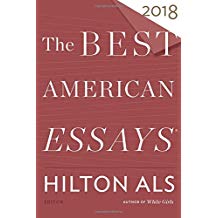 This is a fine addition to a series that began in 1986.  Each year, the series editor, Robert Atwan, chooses a volume editor who has two responsibilities:  to sort through the hundreds of essays that appear that year in national and regional publications and choose the 20 or so (in this case, 24) that make the final cut and to write the introduction to the volume.  Over the years, the introduction has varied from a focus on the essay form or its evolution to a particular theme that the editor sought in his volume.  Als, the drama critic of The New Yorker, has sometimes felt unapproachable to me, too far out in his language, allusions and structure of his work, and certainly several of the essays in this collection mirror that.  I was unable to read three of them all the way through, but others soared and were spectacular.  Als’ introduction focuses on the grim state of the world in the U.S. today, largely focused on his own experience as a gay, Black male and the events that led to the BlackLivesMatter movement, and this theme is also reflected in several of the works, especially a superb exploration of Franz Fanon and his Wretched of the Earth, Edwidge Danticat’s reflections on her experience of sexual abuse as a child, and Steve Harvey’s pondering on the difference between himself as a white man and the other Steve Harvey, a  Black man.  Four essays were superb and will remain with me for some time:  Leslie Jameson’s description of her participation in the Women’s March after Trump’s inauguration; Heidi Julavits’ narrative about her family’s pilgrimage to Robert Smithson’s Spiral Jetty in the Utah desert (a trip that Susan and I made several years ago); Kathryn Schulz writing about her father’s death in the context of losing things; and John Seabrook’s moving essay about his journey into and out of alcoholism.  Each of these essays exemplifies Als’ comment that the essay is “concentrated life, whole and in bits”.  Als quotes Joan Didion:  ‘Every day is all there is’—a message sent in multiple ways in this fine volume.