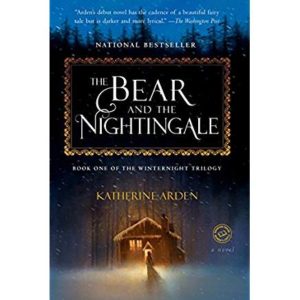 The Bear and the Nightingale, Katherine Arden 2017

In every Sunday’s New York Times Book Review, a featured author is interviewed, and one of the regular questions is  “Are there any genres that you don’t read?”  If asked, I would have answered, Fantasy!, but I may have to rethink that situation.  I hadn’t read any fantasy literature since The Lord of the Rings several decades ago, and in the course of my regular reading, I would not have chosen this book had I not been reviewing it as  a nominee for the 2018 Vermont Book Award.  Having read it, however, I may be a convert.  Fascinating in its descriptive details and character development, gripping in its suspense, and heart stopping in its wonderfully done battle scenes, this rework of a traditional Russian folk tale about the Frost King is Arden’s first novel and a very successful effort. Vasilisa Petrovna, aka Vasya, is the center of this tale of war between two brothers, the Frost King, Death and the evil counterpart, The Bear.  The Frost King keeps order in the world through ensuring mortality among men while the Bear would rule the world through the undead.  The book is very much in touch with the current zombie craze but far superior to World War Z, The Walking Undead, etc.  Vasya and her special allies, the horses and the household spirits overcome evil and the false priest Konstantin in a tense and exciting finale, and she finally succeeds through the sacrifice that her father makes and through her own courage and determination.

This is Water: Thoughts, Delivered on a Significant Occasion, about Living...