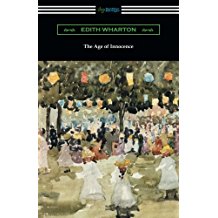 The Age of Innocence, Edith Wharton, 1920

The winner of the Pulitzer Prize for fiction, this novel by Wharton is a beautifully written description of New York society in the 1870’s where the right families living in the right houses doing the right things were the mechanism for controlling the passions and feelings of its members.  Newland Asher is engaged to May Welland and obviously in love when May’s cousin, Ellen Olanska, Countess Olanska, returns from a ruined marriage and scandal in Europe.  Asher falls madly in love and eventually is determined to run off with her despite his marriage when the social circle acts to prevent his rash action which would destroy May, their families, and ultimately the society which is already beginning to creak under its own weight as the 20th C approaches.  Wharton’s eye for detail is flawless and she creates a deep and real affection for her characters as foolish as they may appear in some lights.  The second book in Fisher’s course and the second book that moved me to tears!

The Art of Stillness: Adventures in Going Nowhere, Pico Iyer (#1843)

Howard’s End is on the Landing: A Year of Reading From Home, Susan Hill...
Scroll to top