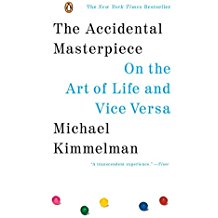 The Accidental Masterpiece: On the Art of Life and Vice Versa, Michael Kimmelman, 2005

Kimmelman, the architecture critic for the NYT and Pulitzer nominee for criticism, has written a quirky but insightful book about art, its forms and its functions.  Moving deftly from Bonnard to land artists and from Bob Ross to Chardin, he explores how art provides a ‘bulwark against oblivion’ for the artist and how it ‘provides clues for how to live more fully’ for the observer.  With chapters about collecting (light bulb museum), climbing Cezanne’s Mt. Ste.Victoire, Charlotte Salomon and her life work ended abruptly by the Holocaust, and Philip Pearlstein’s nudes, Kimmelman writes deftly and provides a boatload of quotes about art.  My favorite, however, is the one he quotes from W. G. Sebald:  ‘Everything is constantly lapsing into oblivion with every extinguished life.  The world is, as it were, draining itself, in that the history of countless places and objects which themselves have no power of memory is never heard, never described or passed on.’  Kimmelman convinces the reader that it is art which offers the opportunity of both seeing and feeling the world more intensely while alive and perhaps preserving some portion of it for eternity.