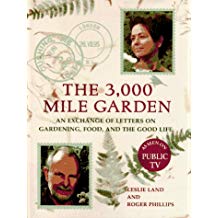 The 3000 Mile Garden:  From London to Maine—-A Correspondence on Gardening, Food, and the Good Life 1992

Leslie Land was a gardener, a New York Times horticulture columnist, and an editor at Yankee Magazine who lived on the Maine coast in Cushing, a small village south of Camden and north of Boothbay.  Roger Phillips was an internationally renowned British gardener, photographer, and garden book writer who was in charge of the extensive reworking of the gardens in London’s Eccleston Square, a 3 acre property about halfway between Hyde Park and Sloane Square. They met in the early ’90’s at a mushroom foray, took to one another, and began an exchange of letters that stretched from 1989-1994.  Their witty, informal, chatty, and occasionally informative correspondence became the basis for a BBC/PBS series on gardening and cooking.  While sometimes getting bogged down in trivial, provincial details about their personal and professional lives, the letters are chock full of excellent tips about gardening, especially in Maine which shares a zone 4 with our Vermont gardens—-tulips, roses, herbs, yellow and white garden plans.  Land’s never-ending struggles with ‘beating back the wilderness’ and the neighborhood woodchucks struck a resonant note with my experience.  Phillips’ plans and plants were interesting but not as relevant to VT gardening. A few recipes were worth noting for future use.  As an aside, I experienced another sad example of Googling a previously unknown author only to find that she had died at age 66 in 2013.  Her web site www.leslieland.com is still up and provides further gardening and cooking tips. Roger Philips appears to still be going strong.