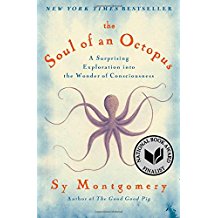 The Soul of an Octopus:  A Surprising Exploration into the Wonder of Consciousness, Sy Montgomery, 2015

Despite being named as a finalist for the National Book Award, I found this to be an exasperating book.  On the one hand, Montgomery does a fine job introducing us to the world of cephalopods, especially the Giant Pacific Octopus, an amazing creature who can grow to 110 pounds and stretch 16 feet with its eight arms.  Its suckers can number over 1600 and a 2.5 inch one can lift 35 pounds.  It has a beak, two eyes that evolved differently but share many of the structures that human eyes have, skin filled with millions of chromatophores that allow it to change color instantly to camouflage itself, the absence of a firm skeleton that enables it to ‘pour itself’ through the tiniest hole, and the female lays 100,000 eggs which despite her diligent tending, may result in two new adults.  We meet several of these creatures at the Boston Aquarium and learn of their ability to identify, bond with, and relate to their human caretakers.  We also, however, have to wade through Montgomery’s seemingly endless blather about her inner feelings about the octopuses (yes, the plural is not –i since you can’t put a Latin ending on a Greek word!), her fellow aquarium volunteers and staff, and her experiences in the ocean.  I really had to work hard to finish this book.  A ten page essay about the amazing octopus would have been a better way to address the topic, but I still intend to visit the Boston Aquarium and see one of these critters up close and personal.