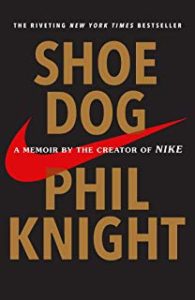 Shoe Dog: A Memoir by the Creator of Nike, Phil Knight 2016

Knight, the founder, creator, CEO, and finally Board Chair of the mammoth Nike corporation which changed the way Americans and the world wear sneakers and dress, has written a terrific book.  A passable track team member at the U. of Oregon in the 1950’s where he met the legendary coach Bob Bowerman, Knight went on to Stanford Business School where he wrote his thesis about the potential for importing  Japanese sneakers into the U.S.  He took this self-described Crazy Idea and after traveling around the world to visit religious and spiritual shrines, he flew to Japan and pitched his idea to Onitsuka, the makers of the popular Tiger shoe.  They made him the sole U.S. salesman in the 13 Western states in 1964 a time when nobody was jogging or running except track teams.  But, Knight was off and running on a 40 year race with insolvency even as he built a $120 million business that went public in 1980 and made him a billionaire.  Along the way we meet his Buttface colleagues who were with him from the beginning including his finance guy and his lawyer who both tipped the scales at 300+pounds for this fitness company.  The writing is clever, often funny, and never dull. The story is epic and should inspire entrepreneurs, runners, and readers of every ilk.  I read this in preparation for a visit to the Nike campus when I’m in Portland, OR next month for a Winthrop House college reunion, but you don’t need that kind of excuse to sit back and enjoy Knight’s ride.

If: The Untold Story of Kipling’s American Years, Christopher Benfey ...