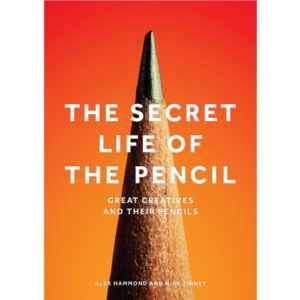 The Secret Life of the Pencil: Great Creatives and Their Pencils, ed. Alex Hammond and Mike Tinney, 2017 (#2223)

This is a charming and creative effort from the UK in which the editors convinced 73 British ‘creatives’, mostly architects, artists, designers, and theater people, to send in photos of their pencils.  They then presented the pencils with an appropriately colored and textured background as art objects and indicators of the artistic process in some sense.  There were also interviews with 21 of these folks giving some insight into their creative process and pencil use. Great fun and a fine introduction to today’s British art scene since I knew only 10 of the pencil providers before reading the book. Fine introduction by William Boyd in which I learned that 14 billion pencils are produced world-wide each year; the pencil was ‘discovered’ in Cumbria, England when a lode of graphite was uncovered in the 16th C, and Vladimir Nabokov was given a present of a 4 foot tall pencil in St. Petersburg when he was a sick little boy in pre-Revolutionary Russia.  All great fun.