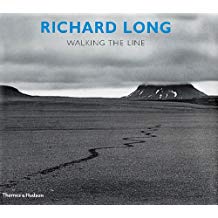 Richard Long is a 72 year old British artist whose work has fascinated and delighted me since I discovered it at the Manhattan art gallery where my daughter, Molly, worked right out of college.  Long is sui generis, not exactly fitting into Conceptual Art (he believes that just thinking about the idea is not enough; it must be executed!) or Land Art (his work is much more ephemeral and less ‘disturbing’ to the natural environment than Heizer or De Maria).  His primary contribution has been to add ‘walking’ to the artist’s toolbox.  Long has walked thousands of miles in England, Ireland, Wales, Scotland, Japan, Korea, Argentina, the U.S., Spain, Italy, France, and elsewhere,  and each walk has been contextualized by an idea and recorded in a text, a map, or a photograph.  One of the many wonderful examples of this idea-execution-recording methodology is his work entitled, Walks of Chance.  The text reads as follows:

“Walk carrying a bag of eleven pebbles with a word written on each/Up Down End Fast Slow North South East West Straight Meandering/Each walk is realized by observing this system: The pebbles are drawn at random out of the bag one by one at indeterminate intervals/Each pebble is returned to the bag while walk proceeds  by following the words on that pebble/This procedure is repeated from pebble to pebble until the End pebble is drawn”

Long then records the sequence of pebbles drawn on six different walks, each ending in “End” and varying from 3 to 14 pebbles in length.  The work is labelled Dartmoor England 1998.

This book presents texts, maps, and photographs in large, beautifully printed pages accompanied by entries from Long’s diary, commentary by an art critic, and an interview.  The book also includes some striking photographs of museum and gallery exhibits from the late 80’s through the 90’s featuring Long’s mud paintings and floor stone installations.

The book has renewed my own determination to continue to create art in our Vermont landscape, so stay tuned to the Project section of the site for new work.

The Temptation of Forgiveness, Donna Leon (#2292)