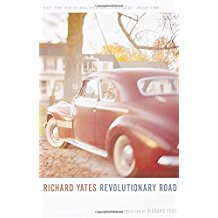 Just writing about this book now is painful.  Yates, a self-destructive alcoholic, wrote a spectacular book about a suburban couple in the 1950’s trapped in a meaningless round of work, children, boring friends, and going-nowhereness.  Frank and April Wheeler and their children live on the eponymous street in a new development.  Knox Business Machines and Maureen Grube, Shep and Millie Campbell, Mr. and Mrs. Givings and their mentally ill son, John, Bart Black at Knox and on and on until Frank cracks and April dies in a self-induced abortion/suicide. Bleak, bleak, bleak as once again (as with Tommy Wilhelm), the main character feels that he was a ‘victim of the world’s indifference and it didn’t seem fair.”