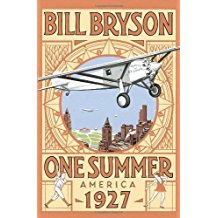 Bryson, one of my favorite wordsmiths, is at his ‘factoid’, humorous,’ tying together loosely related ends’ self in this volume about the incredible summer of 1927 when Lindbergh flew the Atlantic (actually, May 27th); Babe Ruth hit 60 home runs; the Federal Reserve lowered interest rates provoking exuberant margin loans and a major bubble; Al Capone enjoyed his last summer of eminence (there were only 2); The Jazz Singer was filmed portending the end of silent movies and the arrival of ‘talkies; TV was created by Philo T. Farnsworth and stolen by David Sarnoff of RCA;  radio came of age with national networks broadcasting the Lindbergh parade and the world series; Sacco and Venzetti were executed (8 years after their alleged crime); President Coolidge elected not to run; Mt. Rushmore was begun; the Mississippi River flooded worse than ever before; and Henry Ford stopped making the model T.  It was a remarkable summer, but it took Bryson to bring it alive and tie it together.  Fine book.

Why Read #3: Reading for Connection