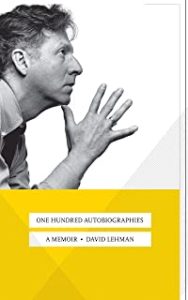 What a fascinating book, this is.  David Lehman, a Jewish son of Holocaust immigrants, grew up in New York’s Inwood neighborhood, went to Columbia and Cambridge, founded the Best American Poetry series in 1988 which has now run to 33 volumes, wrote nine volumes of poetry, and then got bladder cancer.  His travail with chemotherapy, surgery, and the multiple complications that followed between 2013 and 2016 are the background for this memoir, whose title he attributes to the late Mark Strand, a fellow poet and critic.  Through 100 brief chapters, Lehman takes us through his life filled with family (the chapters on his father and mother are deeply moving), baseball (loved his Dodgers and then the Mets) and tennis, friends and lovers, names (one chapter introduces us to a number of David Lehman’s from the Goldman Sachs trader to the one born in Dallas who died in Vietnam and another chapter introduces us to Walter Lehmann, the name of an uncle who went to Australia to flee Hitler as well as the nom de plume an Australian poet named Gwen Haywood used to avoid having her poems rejected because she was a woman (as a further aside, Lehman’s wife’s maiden name was Haywood)), The book is wonderfully full of references to the 60’s, 70’s etc since Lehman is only three years younger than I:  Phil Ochs, Yogi Berra, Frank Sinatra, Dean Martin, Auerbach’s Mimesis, Lionel Trilling (he was LT’s assistant at Columbia as a grad student), John Ashbery (the first guest editor of the Best Series and a lifelong friend), and many others.  My favorite reference is his quote from Susan Sontag who said that modernism was given its distinctive character by Jewish moral seriousness (Trilling)and homosexual aestheticism and irony (Ashbery).  What underlies all of this wonderful work is Lehman’s drive to write and his seemingly endless ability to revisit his past through memory.  He wrote 500 words/day throughout his medical ordeal, and while some of the chapters have the surreal characteristics likely due to medication and anesthesia, the overall work is quite wonderful.  Today he remains active, writing, and appears to be a survivor of a form of cancer that is quite devastating.  Go David!!!!