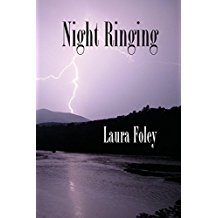 Foley who has a graduate degree in English from Columbia and is a trained Zen chaplain who volunteers in hospitals and prisons, has written her fifth book of poetry from her home in Pomfret, VT where she has a view of Mt. Ascutney, whose outline is clearly illuminated by lightning over the Connecticut river on the cover photograph.  Divided into five sections without titles, the poems are roughly chronological beginning with her childhood ripped apart with divorce, a domineering father and an alcoholic, depressed mother and concluding with her observations about her grown children, her own divorce, her discovery of her love for women, and finally her current relationship.  Foley recounts these events with brief, concise, and direct poems that hint at the life events.  With the occasional poem about her work—a poem dedicated to a prisoner serving a life sentence and one about a woman whose life as a runner and builder has changed due to an amputation—the focus is almost entirely on family and love relationships.  Dreams and fantasies occasionally intrude, but it’s the real nuts and bolts of her childhood family and her own family that end in divorce that draw her concentrated attention.  The gradual awakening of her love for women is beautifully rendered as is my favorite poem about aging, Ode to my Feet.  Her tip of the hat to Stevie Smith’s Drowning not Waving entitled Not Drowning is just about letter perfect:  All my life I’ve been swimming, not drowning/despite any appearance to the contrary.”  Yes, divorce, depression, loss may appear to be leading to drowning, but Foley’s passion for life and joy, expressed beautifully in these poems triumphs.