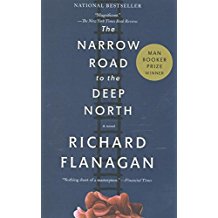 Last year’s winner of the Man Booker Prize, this is a big novel with big characters, action, and story line.  Flanagan takes an ancient Busho poem for his title and a WWII Bridge on the River Kwai story and melds them into a rather potent read.  His ability to paint a scene, whether a love between Dorrigo Evans and his ‘aunt’ Amy, the beating of an Australian POW by Korean guards at the behest of a Japanese major, or the wildfire in Hobart that threatens to wipe out Dorrigo’s family, Flanagan is a master story teller.  His ability to flip back and forth in time from Dorrigo’s childhood to his time as the POW camp doctor in Siam to his later life as a war hero, surgeon, and serial adulterer is impressive.  He ties up the narrative arcs of so many characters so neatly that it threatens to feel too pat, but it doesn’t.  One cares about the Japanese POW camp major, the Japanese colonel, the Japanese medical student, Amy, Ella, Dorrie, and all of the POW’s who Flanagan makes come alive.  This is an impressive novel and one worth reading