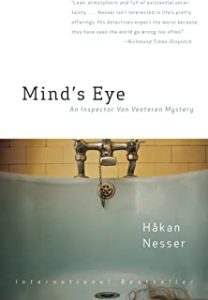 Another example of reading from my library, this Swedish author’s debut mystery in the Inspector Van Veeteren series has been sitting in my mystery bookcase for several years until the other day, when desperate for an escape from the daily headlines, I picked it up and began to read. Though I initially wasn’t into the characters, as soon as Van Veeteren appeared, rumpled, grumpy, laconic, toothpick chewing, and deep into understanding the psyches of all the characters, I was hooked.  I won’t give away the plot but it’s good and a fine vehicle for introducing me to Nesser who has won numerous Swedish mystery book awards and whose books have spawned 7 movies.  Not sure what it is about Sweden and Norway that leads to so many grim, violent mysteries, but perhaps the weather. At any rate, if you’re looking to get into a new series, this one bears trying as there are now 10 Van Veeteren books. My only gripe is that when I went on Google Maps to check out the town where all the action takes place, there’s no such place which evidently is characteristic of Nesser’s work. Is it Sweden, Holland, or somewhere else?  Given that I like ‘place’ and consider it a major character in most books, I find this unsatisfactory, but who asked me?

On Becoming a Novelist, John Gardner (#2585)
Scroll to top