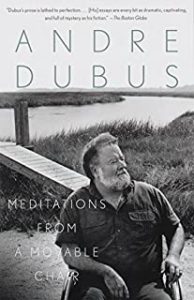 Dubus is a fascinating character.  Born in Louisiana, educated at the Iowa Writers Workshop, a Marine lieutenant who saw duty on an aircraft carrier, he suffered a catastrophic injury after stopping to help a stranded motorist on a highway.  Left wheelchair bound, he continued his career as a writer, a teacher, and a writing workshop convener publishing eight collections of short stories and novellas and two books of essays before he died at the age of 62.  He’s buried in Havehill, MA where he lived and taught. I was looking forward to this collection after enjoying his short stories in Dancing After Hours, and some of the essays are wonderful.  But the book is too repetitive and is quite religious, as Dubus struggles with his disability, his failed marriages, his depression, and his Catholic faith.  What he doesn’t seem to regret or be sad about is his writing, which remains vibrant and powerful.  His love for Hemingway’s short story, In Another Country led me to reread that and some of Hem’s other short stories, reason enough to read this book.