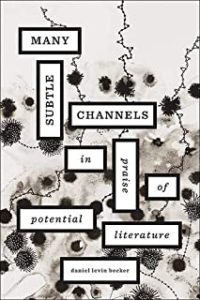 David Levin Becker was a recent college graduate when he was hired to catalog the writings and collected odds and ends of OuLiPo in Paris.  Wha,t you may be asking, is OuLiPo?  Well, unless you’re fascinated by literary mysteries, intrigued by weird wordplay, or obsessed with writing, the French, and intellectual snobbery, you might want to move on to the next review.

I, on the other hand, have all three conditions and have been hooked on OuLiPo since I read about George Perec’s book, The Void in English translation, which runs to several hundred pages and contains no ‘E’s.  That’s’ right, a book length work without the most common vowel!  That’s called a lipogram and is one of several dozen forms of ‘writing with constraint’ or ‘potential literature’ that the OuLiPo is devoted to exploring.

The group was formed in the 1960’s by Raymond Queneau and Francois Le Lionnais.   I read a book by Queneau entitled Exercises on Style that tells the same brief story in 99 different ways and was hooked.  The group comprises 38 members, and only 38, of which no more than 12 can be living at the time.  Once you’re in OuLiPo, you remain in the group even after you’ve died.  In addition to Queneau, the two most famous members (both deceased) are Italo Calvino and Marcel Duchamp.

The book is at its best when it is describing some of the constraints, the mathematical structures, and the formulas behind some of their literary explorations which include the S+7 technique (each noun is replaced by the seventh noun following it in a given dictionary), the belle absent (an ode that contains the same number of lines as the subject’s name does letters in which each line contains every letter in the alphabet except one), the mono-vocalism (a text that suppresses all vowels but one), the chicago (four sets of words or phrases with similar syntax act as clues for the fifth set that is also the homophonized name of a city), and my favorite, the metro poem (a poem with one fewer line than the journey on the Paris Metro contains from beginning to end and the ne plus ultra of metro poems made by passing through every station in the Metro in a single trip), and the chronopoem (a poem designed to take just as much time to recite as it takes to do the task it describes).

You get the idea.  The OuLiPans theory is that by constraining writing within strict mathematical or structural parameters, the writer is freed up to be more creative.  This concept has spawned numerous offshoots including similar constrained approaches in painting, music, mystery writing, and even cooking.

This is a fascinating and well-written book about the topic.  Not for everyone, but I loved it.

This Next Tenderness by Ellen Steinbaum (#2632)
Scroll to top