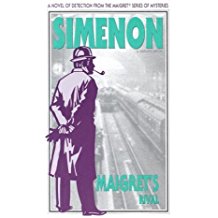 Maigret goes to St. Aubin, a small town at the request of the Examining Magistrate in Paris to sort out the Magistrate’s brother-in-law’s situation.  A young man has died, ostensibly in a railroad accident, but rumors are circulating that he was killed by the brother-in-law, a respectable squire from a fine family.  Maigret takes the train from Paris only to find that heading to the same town is an old rival, Old Cadaver, a former inspector who worked for Maigret.  Over the course of 2 days, Maigret figures out the reality of the situation—a murder, a pregnancy resulting from an affair with a family friend, and bests his rival before returning to Paris.  Justice has not been done, but life is messy, and Maigret at least sorted things out for the best.  Two fascinating French literary references—Proust is recalled in a paragraph (“Every now and then, an insignificant happening, usually a whiff of some scent, brings back in a split second, a particular moment in life.  The sensation is so vivid, so gripping, that we want to hold on to this living fragment of our past, but it vanishes almost at once and we are unable to say what had stirred out thought.”).  A second reference is the name of the inn in St. Aubin, the Lion d’Or, the same name as the inn in Flaubert’s Madame Bovary.  Great fun!