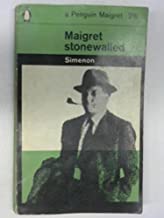 It’s 1930, and Jules Maigret is sweating out a torrid Paris June when he is notified of a murder at the Hotel de Loire in Sancerre.  A traveling salesman, Emile Gallet, has been found shot and knifed, and as the Chief Inspector of the Flying Squad, Maigret must travel to Gallet’s home in St. Fargeau and and then travel with the widow to identify the body.  The widow identifies her husband, but strangely he  who is booked into the hotel as Monsieur Clement.  The complications mount as Maigret in his usual method digs deeply into Gallet/Clement’s character, background, behavior, etc.  As he first identifies and then dismisses the neighbor, the son, the daughter-in-law and other potential suspects, Maigret is ‘stonewalled’—a murdered man without a murderer.  As usual, by dint of long study and thought, Maigret solves the case.  Only the second of Simenon’s 72 Maigret novels, this one shows all the signs of the future success of this series.  A perfect summer read. (As an aside, the image of the book is the cover of the original Penguin 1963 edition. All of the Maigret books are being reissued by Penguin which is a gift to all readers but personally, I love to find and read the original, old Penguins with their green covers and quaint type.  Perhaps this is because my first Maigret was given to me in such an edition by a co-worker of Susan’s at Fernald State School, an Eastern European immigrant named Helen Byers who was a gentle soul and a privilege to know. Thanks, Helen for hours of reading pleasure.)

Spirit of Place: The Making of a New England Garden, Bill Noble (#2573)