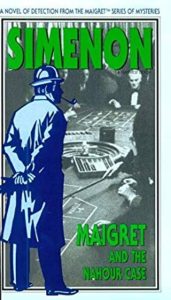 A tense and intriguing Maigret mystery, number 65 of the 75 Maigret books that Simenon wrote.  It’s unusual in that we don’t know who the murderer is until the final few pages, but it’s typical in that Maigret patiently, ploddingly, and insightfully confronts the psychological motives of the suspects before deciding who is the real murderer.  The action takes place in Paris and following on Google Maps, I was able to trace the path of the actors and Maigret as they criss-crossed the Seine.  A Lebanese gambler is found murdered in his study after his wife turns up at Maigret’s friend, Dr. Pardon, with a bullet wound in the back.  Maigret sorts out the two shootings in a complex series of interviews.  Classic Simenon and a fine way to start the series even though it’s the final book.

The World Pushes Back, Garret Keizer (#2432)
Scroll to top