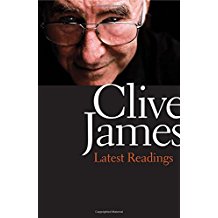 James, an Australian poet and literary and cultural critic, was diagnosed with leukemia in 2010 and finding himself surprisingly still alive in 2015, decided to share some of his ‘latest readings’.  Though occasionally evidencing some of the ‘slapped together, lower quality’ writing that characterized Christopher Hitchens’ final book, James shows flashes of his usual clever, erudite, and insightful criticism as he holds forth on bunches of books that he picked up at The Strand in NYC and at Hugh’s bookstall in Cambridge, UK which he frequents.  American politics, Hollywood, Kipling, Naipaul, Larkin, Sebald, Anthony Powell, Olivia Manning and even Samuel Johnson come in for his barbed but good humored observations.  Joseph Conrad is a favorite while Hemingway is distinctly not, though he does refer to his ‘magnificence.’   Patrick O’Brien’s sea tales about Jack Aubry are much loved. James says that ‘Being book crazy is an aspect of love, and therefore scarcely rational at all.”   His brief chapter (they’re all quite brief and therefore, quite readable at a moment’s notice) on Richard Howard, the American poet whom he discovers through his favorite Richard Wilbur’s criticism contains the wonderful phrase, “..he has the gift of working a mind-ful of memories and impressions into an apprehensible shape.” Wonderful phrase!   James defines the role of the literary critic as saying, not ‘look how much I’ve read,, but ‘look at this, it’s wonderful.”  I like that so much!  In that spirit, I’m adding the following books which James loved:  Abba Eban’s Personal Witness, Stephen Edgar’s The Red Sea, and Ron Rosenbaum’s Explaining Hitler.  Lots of others warrant a read, but, as James writes in the final sentences of the book:  “If it moves to the foreground (he’s referring to Beethoven’s and Mozart’s chamber music which he can’t listen to while reading because it’s too good), I will be on my way out at last.  I will be halfway through the dazzling, multifaceted wall of books, and on the brink of nothingness, where everything begins again, but for different people.”  Worth reading this book if only for that final phrase!