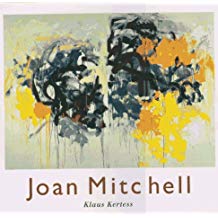 Joan Mitchell (1926-1992) was an American painter whose work I first saw at the Museum of Fine Arts, Boston and have now enjoyed in New York, Denmark, and elsewhere.  A member of the New York School of  abstract expressionists, she remained true to the gestural painterliness of her early work throughout a career that saw her living in Greenwich Village, Paris, and finally Vetheuil, northwest of Paris and the home of Monet.  Early influences were Van Gogh and Matisse for their use of color and brush strokes and later influences were deKooning, Pollock, Gorky, Kline, and Guston.  A native of Chicago where she attended Francis Parker, she had numerous love affairs and friendships with famous writers including Frank O’Hara and Samuel Beckett.  The latter’s ‘every syllable is a second gained’ and Then the Last Time; Between; Before, Again were influential on her.  Kertess’s book does a fine job discussing her painting and the influences at various time of her life though it’s long on art history jargon.  The 120 dazzling color plates are worth the price of admission.  I love her work!

A Carnival of Losses: Notes on Nearing Ninety, Donald Hall (#2285)
Scroll to top