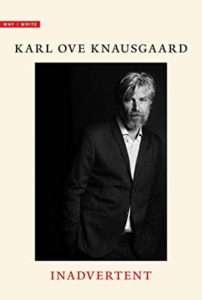 Knausgaard is perhaps the most prolific writer of our time, at least if measured in terms of the number of words he’s written.  His six volume personal story, ‘My Struggle’ (in addition to boldly assuming the title of Hitler’s Mein Kampf) has been described as deadly boring by some and as awe-inspiring by others.  I began volume 1 and gave up after about 50 pages when nothing much had happened and I wasn’t terribly interested in the main character.  On the other hand, I’ve loved his brief volumes on Summer, Fall, Winter, Spring, written to his yet to be born and then infant daughter in which he set himself the task of writing at one sitting and in one or two pages a description of a common thing or phenomenon, most of them physical or material.  So, I wasn’t sure which Knausgaard was going to show up in this slim 92 page volume based on a lecture he presented upon being named a winner of the Windham Campbell Prize in 2018.  The Prize, awarded annually by Yale, honors achievement in fiction, non-fiction, poetry, and drama.  Knausgaard was asked to speak to the question of Why I Write.  He briefly cites personal, existential and social reasons but then concludes that literature is an “outside place where what is inside becomes visible”, the “distance between something that is true and the setting in which truth unfolds.”  Citing Ulysses, Don Quixote, Madame Bovary, The Idiot, Hunger, The Unbearable Lightness of Being, and most prominently War and Peace, he claims that writing needs to be inadvertent for it to be granted access to the inner soul of the writer who must “seek the complexity that lies beneath our self-insight and self-image and which can be accessed only by not thinking about how our thoughts and feelings will seem to others, how it will look, who I am if I think and feel these things.” This is an important book about writing, about living, and about self-knowledge.  Every page had lines that were worth quoting and remembering.  I may even have to go back to My Struggle!