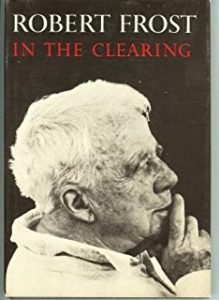 In the Clearing, Robert Frost 1962

Frost is one of my favorite  poets. A staunch New Englander with roots in Massachusetts where he was born in Lawrence, New Hampshire where he taught school, farmed, and attended Dartmouth, and Vermont where his lived for years near Middlebury and wrote verse that brought him  four Pulitzer Prizes and honors including Poet Laureate of Vermont.  I love his best work—Mending Wall, The Road Not Taken, Birches, Stopping By the Woods on a Snowy Night, Death of the Hired Man.  So it was with some sadness that I read this collection, published shortly before his death at 89 in 1963.  Perhaps it was the strict rhyming and rhythm scheme of the poems, so out of date in today’s poetry.  Perhaps it was the subject matter, so distant from his New England roots.  Interestingly, in reading about this volume, it appears that Frost himself was not pleased with the work, initially titling the book The Great Misgiving and waiting several years to publish it. The precipitating factor in the timing of its publication was the invitation to Frost to read a poem at JFK’s inauguration in 1961.  Frost wrote a new poem for the occasion, For John F. Kennedy His Inauguration but on a bright and sunny day, he was blinded at the podium and unable to read his special poem.  Instead he recited from memory, the 1942 poem, The Gift Outright, which begins “The land was ours before we were the land’s.” These two poems are, for me, the best in the book, and the JFK poem is heartbreaking in the contrast Frost’s words paint between that time and today. Frost wrote, “Our venture in revolution and outlawry/Has justified itself in freedom’s story/Right down to now in glory upon glory./Come fresh from an election like the last,/The greatest vote a people ever cast,/So close yet sure to be abided by,/It is no miracle our mood is high.”  How far have we fallen in 60 short years, nearly the whole of my life. Shame on us.  Frost, near the end of his life, was honored by the newly elected President and by his nation.  While this volume largely shows the loss of his poetic genius, he was able to reach his former heights inspired by the new, young president.  I miss those days.