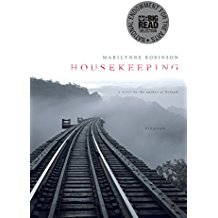 Finally read one of the two books that I had not managed to get to during Fischer’s course on American novels (the other being Lolita), and grateful that I returned to Robinson.  Having read Home and Gilead, I knew of her skill and power as a writer of sentences and a describer of the human condition, but despite this preparation, this book overwhelmed me.  Sometimes too meandering and vague, the overall impact was great.  I began to re-read it immediately upon finishing this story of the three daughters of a widowed woman, referred to as the grandmother living in Fingerbone, Idaho sometime in the 1970’s, though the time and state are never clearly stated.  After her husband, a trainman, perishes along with everyone else when the train plunges off the bridge (a constant symbol and presence) into the lake (ditto), the grandmother raises her three teenage daughters, Molly (who leaves to become a missionary in China), Helen (who elopes, has Ruthie and Lucille, and drives ala Thelma and Louise into the lake one day), and Sylvie (who visits Helen in Seattle and only returns twice to Fingerbone).  The story, told by Ruthie, picks up when the grandmother dies and the girls’ care eventually devolves onto Sylvie, a transient and train hopper.  Lucille becomes a fastidious and intact young woman, while Ruthie and Sylvie descend deeper and deeper into madness until they set the house on fire and flee across the bridge.  They’re thought to have died in the lake, and are thus, set free from all expectations.  Resurrection, ascension, the impossibility of life and knowing people are all themes here and beautifully told by Robinson.  A powerful novel!

True Refuge: Finding Peace and Freedom in Your Own Awakened Heart, Tara Brach...
Scroll to top